Cairo & Luxor by flight from Hurghada 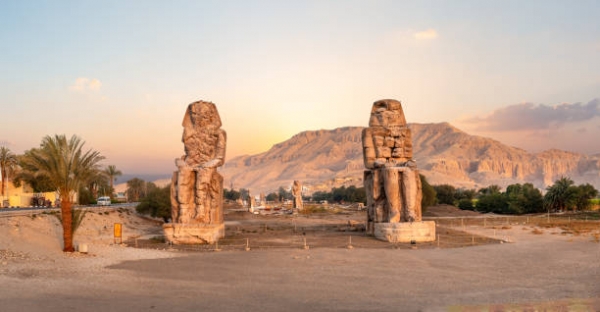 Enjoy 1 Night / 2 day trips to Cairo and Luxor from Hurghada, Giza pyramids, the Great Sphinx and the Egyptian museum then catch your flight to Luxor for overnight . in Luxor tour to Karnak temples, The Valley of the Kings and Hatshespsut temple , then we drive you back to Hurghada by Air-conditioned vehicle.

Day 1 : Cairo & Giza
Your Tour Guide will pick you up from your Hotel in Hurghada to Hurghada international Air-port for a flight to Cairo , Upon arrival to Cairo airport, you will meet your Egyptologist guide who will accompany you to discover:

The Egyptian Museum 🏛 :
The home to the largest collection of ancient Egyptian artifacts, The museum displays a rare collection of 5000 years of art ,including treasures from 👑 Tutankhamun and artifacts dating back to 4000 BC. Over 250,000 genuine artifacts are presented .
Unfortunately you have no enough time to see everything over there , that is why your visit to the Egyptian museum will be divided into two parts , a guiding tour and some free time to look around the museum on your own , at the end of the guiding tour the meeting time⌚ and point will be fixed.

Lunch:
Lunch 🍽 will be served in one of the best local restaurants in town , lunch is including just the drinks are extra paid.

Giza Pyramid Complex🔺🔺🔺:
Tour the Giza Plateau, upon arrival to the pyramids area you got to go outside the vehicle to go through a checkpoint , then you start your tour around the site of the ancient pyramids of Cheops🔺 , Chephren 🔺and Mycerinus 🔺. six little pyramids🔼, the great sphinx 🦁 the ancient world’s largest monumental sculpture, carved from a single ridge of limestone and the Valley Temple , which belongs to the Pyramid of Chephren The complex dates back to the 4th dynasty 2400 years B.C.

In the evening you will be transfered to Cairo airport for flight to Luxor where you will be transferred to 4* hotel for overnight.
Day 2 : Luxor highlights
After you take your breakfast at your hotel , you will be accompanied by your tour guide and a private air-conditioned vehicle to visit Luxor Highlights discover:

Luxor it self as a city is divided by the river Nile in two banks , eastern bank and western bank , you have some sightseeing to visit on the east and more on the west , you are starting the tour visit the east bank of Luxor , the first visit will be to The Karnak Temples:
No site in Egypt is more impressive than Karnak Temples , where generations of pharaohs wished to record their names. Walk 🏃through the Great Hypostyle Hall , to reach the sacred lake 🌅 of the temple ,The Karnak complex is actually three main temples situated on 247 acres of land considered as the largest religious center ever built .
Unfortunately you have no enough time to see everything over there so your visit will be divided in two parts a guiding tour and some free time⌚ , by the end of the guiding tour the meeting point and the meeting time will be fixed.

Next visit will be the restaurant for 🍴Lunch , lunch will be served in a nice local restaurant , it's including in the tour , just the drinks are extra paid .

After lunch , you start the tour around the west bank of Luxor visiting the Valley of the kings , the royal 👑 cemetery of the pharaohs of the New kingdom , 63 tombs are over there , unfortunately most of them are closed for safety reasons or for restorations , around 10 tombs are opened nowadays , your tour guide will recommend you the best of the opened ones to visit .
The Valley of the Kings:
the burial ground of the pharaohs rulers from the 18th to 20th dynasty , For a period of 500 years beginning in the 16th century BC, tombs were built along this valley for pharaohs , including that of the great Pharaoh Ramses II and boy Pharaoh Tutankhamen. Found in 1922 by British 🎩 archaeologist and Egyptologist Howard Carter.
The tomb of Tutankhamun is extra paid , 300 Egyptian pound each ,over there they don't accept any other currency but Egyptian pound , so if you are interested make sure you have some Egyptian money .

Next visit will be to the temple of the queen Hatshepsut , a memorial temple was built to keep the memory of the queen , one of the most famous women in the ancient Egyptian history , after the historical background you will get some free time for photographing 📷 .
The Temple of Hatshepsut:
Temple of Hatshepsut, ancient Egypt’s first female pharaoh , She came to power during the New Kingdom after the death of her father, Tuthmose I, and her half-brother and husband, Tuthmose II, who succeeded her father on the thrown.

Last visit will be to the colossal of Memnon , Two massive stone statues of king Amenhotep III are the only remains of a complete mortuary temple. The statues are made from blocks of quartzite stone which exist in Cairo then moved 700 KM to Luxor. representing the king Amenhotep III sitting on his throne flanking the entrance of his own temple .
After the historical background you will get some free time for photographing 📷 .

At the end of the day , you will be transferred by a private air-conditioned vehicle to your hotel in Hurghada.
It's good when the guide is good🕵
Our Tour Guides are group of Egyptologist professional licensed tour guides , members of The Egyptian General Tourist Guides Syndicate . based in the major touristic cities in Egypt .since they graduated they started working as free lancer tour guides for many international travel agencies in Egypt .In the meanwhile they joined our team work. with all the knowledge they have , the experience they gained and the passion to our beloved country Egypt we decided to take a step forward to reach you and offer our services ☺ .
Vehicles Used 🚌
New branded air-conditioned vehicles with professional drivers . Our vehicles are different sizes according to the number of travelers . We keep updating our vehicles to always get the best modern ones .
💯💯 DON'T FORGET : 👇👇👇
- Wake up call ☎ ( from the hotel reception )
- Breakfast box ( order one day before the trip )
- Passport, or at least a copy
- Cap , hat , camera 👒 📸
- Sun creams 🌞🌞
- Sun glasses 🕶
- Comfy shoes 👟
- Extra money 💳💰for optional and personal expenses
Trip advisor reviews ⭐⭐⭐⭐⭐